One of the most enduring comic book heroes is the Dark Knight himself, Batman. He’s been forever immortalized in comic books, film, animation, and video games, as well as decade’s worth of toys and collectibles. In 2006 he also became an overnight hit with the perennially loved LEGO toys, and since then the Batman has been a popular part of LEGO as toys as well as two hit video games aptly called LEGO Batman and LEGO Batman 2: DC Super Heroes. In September 2012, DK Publishing, in partnership with LEGO and DC Comics, took a look at the phenomenon of Batman in LEGO form with the LEGO DC Universe Super Heroes: Batman Visual Dictionary.

Aimed for readers 6+, the book has the same tried and true format as the LEGO Star Wars Visual Dictionary and LEGO Harry Potter: Building the Magical World books. The book is divided into several chapters – The World of LEGO Batman; LEGO DC Super Heroes; Beyond the Brick, and Going Digital. Also included is a timeline of all the LEGO toys from the original release from 2006-2008 and the recent 2012 rebranding of the line to DC Super Heroes, which adds in other DC Comics heroes and villains including an up-to-date minifigure checklist of all the figurines in the series that have been released up to the date of publishing.

The World of LEGO Batman chapter focuses on the original toy line from 2006-2008. The series was inspired by both the original DC comic books as well as the motion pictures. Featured, of course, is Batman featuring photos of the minifigure variations from the line as well as brief history of the hero and his butler Alfred. Featured also in the section are details of the LEGO toys of the Batmobile, the Batcave, and other Bat-Vehicles for land, sea, and air. Also included are all the supporting cast made into LEGO toys from sidekicks to villains, fun facts on them, as well as the vehicles and gadgets they use in their respective LEGO sets. Each listing includes the set number and release date for all the LEGO sets.

The LEGO DC Super Heroes chapter focuses on the 2012 series of toys, which now includes other popular DC Comics superheroes as well, including Superman, Wonder Woman, Lex Luthor and others as well as updated vehicles, buildings, and more.

The Beyond the Brick chapter is a fun behind-the-scenes chapter on the making of the toy line and how the LEGO sets are designed and released, as well as many of the merchandise tie-ins that LEGO Batman has spawned, including pajamas, McDonalds Happy Meal toys. There are also several pages dedicated to the LEGO Batman video game series and a look at the variety of Batman and Robin costumes used to play both games, all the unlockable characters to play, as well as the vehicles and settings.

The book has a lot of charm. Spread throughout the book as well are two-page spread comic book stories that feature the LEGO minifigures; “brick facts” that are quick fun facts for readers on almost every page; fun descriptions of the heroes, villains, ships and more throughout the book; a flip-book animation of Batman vs. the Joker; and to top it off, the book includes an exclusive Batman minifigure of Batman’s electric suit from the LEGO Batman 2 video game. In short – if you have a Batman fan young or old, this book is for you. Read it and enjoy the wonderful world of fun that DC Comics and LEGO has created. 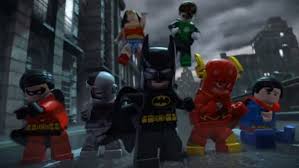