With this summer shaping up to be another fantastic time for comic book fans—with feature films including The Avengers (May 4th), Amazing Spider-Man (July 3), and Dark Knight Rises (July 20)—kids especially are getting treated to a double whammy of DC and Marvel Comics presence on television as well, with DC Comics’ DC Nation programming on the Cartoon Network cable channel and Marvel Comics’ Marvel Universe programming on Disney XD channel.

Sure, we’ve had animated series with tie-ins to well-known DC and Marvel Comics properties before, but this is the first time there has been a clear-cut focus on the companies themselves and their properties, and the results are fairly positive. The Marvel Universe line-up is highlighted by two animated series: the brand-new Ultimate Spider-Man show as well as the return of The Avengers: Earth Mightiest Heroes. Today we’re going to look into Disney’s Marvel Universe Ultimate Spider-Man animated series, which premiered this past Sunday, April. 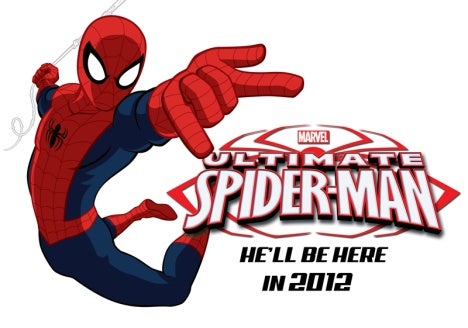 The premise of the new Ultimate Spider-Man series from the premiere episode is that Peter Parker is 16 years old and still in high school. It has been one year since Peter was bitten by a radioactive spider and became the hero known as Spider-Man. He attends high school alongside his longtime friend Mary Jane Watson, who longs for a career working for the Daily Bugle as a reporter. Peter is still being bullied by the football jock Flash Thompson, who mainly so far just enjoys stuffing “puny” Parker into lockers, and he has a good friend in Harry Osborn, the son of billionaire Norman Osborn. Peter still lives with his Aunt May, who is still mourning the loss of Ben Parker, Peter’s uncle, and Peter is still hounded in the press by J. Jonah Jameson, who still thinks Spider-Man is a menace to New York City. The series is squarely based on the daily life of being a high school student, albeit with super-powers.

After a disastrous battle against the villain called The Trapster, which results in a lot of collateral damage near the battle, Spider-Man is visited by Nick Fury, the director of S.H.I.E.L.D. (the acronym stands for Strategic Homeland Intervention, Enforcement and Logistics Division), who wishes to have Spider-Man join the agency and be trained to be a hero in league with Captain America and Iron Man. As Fury puts it, “I want S.H.I.E.L.D. to train you to be a better Spider-Man. The Ultimate Spider-Man.”

Meanwhile, what would a super-hero show be without the villains working in the shadows? Norman Osborn is behind a plot to replicate Spider-Man’s powers in order to mass-produce an army of super-soldiers to the highest bidder, with the aid of Dr. Octopus. Osborn has hired the Trapster and the remaining members of the Frightful Four (The Wizard, Klaw, and Thundra) to capture Spider-Man.

After a short battle against the three remaining members of the Frightful Four at his own high school, in which Harry Osborn is injured, Peter decides to accept Nick Fury’s offer and signs up as an agent of S.H.I.E.L.D. There he has the latest technology at his disposal, including a top-of-the-line web shooter and a Spider-Bike that can transport him faster across town in an emergency than his web-shooters and can also climb on any surface. Spider-Man finds himself one of a new team of rookie heroes who need guidance as well: Power Man (Luke Cage), Nova (Sam Alexander), and White Tiger (Ava Ayala). Nick Fury hopes that one day the team will be as well-honed as the Avengers and wants Spider-Man to help shape to show them the ropes. After defeating the Frightful Four once again, Peter discovers that other remaining members of the team are now also attending Peter’s high school alongside him and there’s a new acting principal at the school who in reality is S.H.I.E.L.D Agent Phil Coulson, who supervises the heroes.

The executive producer of the show is Brian Michael Bendis, who is no slouch on working with Spider-Man, as well as fan-favorite Paul Dini, who has been one of the creative forces behind the original Batman: The Animated Series from the 1990s and has worked with comic books and animation for decades. Paul Dini wrote the script for the first two episodes as well.

The voice cast has done a great job. Drake Bell, who voices Peter Parker/Spider-Man, does a decent job that’s full of humor. J. Jonah Jameson is voiced by J.K. Simmons, who played Jameson in the three Spider-Man films, and Clark Gregg, who does the voice of Agent/Principal Phil Coulson, is a nice touch as well since he plays the same character in all of the live-action Marvel movies tying into the Avengers films, including Iron Man, Iron Man II, Thor, and The Avengers. Stan Lee, Spider-Man’s, co-creator also makes a fun appearance as the high school janitor.

The series has a good mix of humor and action, which may come as a surprise to some, but it’s a welcome and light-hearted change. Those familar with the Teen Titans animated series will note a lot of similar anime-inspired chibi character moments that happen on the side, as well as an almost frenetic pace of humor dashed in with a straight storyline.

I liked how Aunt May is much younger in the show than the very old and fragile person she is depicted as in the comics, and how she is very much inspired by the Ultimate Spider-Man comic book series. It’s a refreshing change of pace. Some might not like the de-aging of some of the heroes like Luke Cage and Danny Rand, but I’m looking forward to seeing the heroes all work together as a team. I haven’t seen a team Spider-Man show since the 1980s series Spider-Man and His Amazing Friends, which featured Spider-Man teaming up with Iceman and Firestar each week. I’m a little leery of the introduction of some of the gadgets on the show, such as the Spider-Bike—which was mostly used for humor in the second episode—but I’ll reserve my opinion until I have seen a few more episodes.

It may not be for everyone, but watching Ultimate Spider-Man alongside my 7-year-old son and hearing him laugh made me appreciate the fact that the right mix of humor and adventure (such as Avatar: the Last Airbender) can make for some very engaging storytelling that doesn’t detract from the main plot. I’m really curious to see where the show goes on from here, but for now I’m hooked.