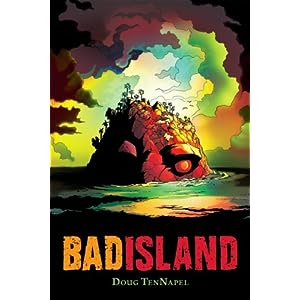 A family vacation on a boat turns into an adventure like no other as the castaways have to work together to get off the strangest island of them all filled with creatures and plant life that isn’t found anywhere on Earth. Meanwhile, in the far reaches of space, large armored giants guided by a race of former slaves battle against their former masters for the right to be free.

Teenager Reese doesn’t want to go on the boating trip. Near adulthood, he’d rather stay home than spend some time with his family and he’s not alone: the whole family would rather not be going. His mom, Karen, would rather tend to her orchids instead of sailing; father Lyle is too busy packing; and no one is listening to little sister Janie, who’s lost her pet snake, Pickles. They’re all talking, but no one is listening.

Once their boat gets caught in a sudden storm, the family all make it to shore. Karen wakes up on the shore with a vision of humanoid-like slaves, stick-like alien masters, and of giant robot-like saviors who come to free the slaves. Once reunited despite the loss of one family member – the snake Pickles has died (little Janie carries it’s carcass around with her for the entire book to much humor) – and the family must try and survive by building a shelter, learning how to find their way around the island, and to actually work together as a family unit for the first time. When they discover the island is filled with strange plantlife, unimaginable beasts, and technology that is nowhere from Earth, they have to depend on each other more than ever before to survive.

Creator Doug TenNapel’s been known to throw the kitchen sink into his mad graphic novel creations. His graphic novel Creature Tech featured theology, a giant insect, the Shroud of Turin, cat creatures, a giant space slug, and an evil spirit; Iron West was a western tale with twist with metal men and sasquatch throw in for good measure; Tommysaurus Rex was a twist on Old Yeller with a boy and his T-Rex pet; Monster Zoo featured the most bizarre zoo ever in existence; and Ghostopolis took a brand new look at what it’s like in the afterlife. Needless to say, TenNapel’s always got a frenzied view at storytelling that’s never short on ideas.

Family is the main focus of the book and it plays a big part of the secondary storyline as well, that I won’t spoil. There’s a tenderness that the characters have endured and helps to round them out and make them more believeable. You actually can feel the love and strength that the family has built their foundation on since the birth of Reese.

Bad Island, like Ghostopolis, is published by Scholastic Books’ Graphix imprint, and the book looks surperb. TenNapel’s pencilling is very stylized, cartoonish look that’s full of kinectic energy. TenNapel also uses several full bleed splash pages that help accent the action in some key scenes that go past the border and are quite striking. The coloring headed by Katherine Garner and Josh Kenfield is very complimentary to TenNapel’s style and fits the mood of the book perfectly. TenNapel’s storytelling is spot on and brings to life a family that is probably all-too familiar to most American households trapped on an alien island. Humor is sprinkled throughout the book – especially the scenes with Pickles the snake – both when he’s alive and dead are truly hilarious.

There is some violence in the book, but it’s mainly when the family are trying to escape from some alien-like creatures and they attack them with a machete and other weapons, but it’s never bloody. There’s also some battles in space with the second storyline, but doesn’t rise above anything seen in sci-fi films like the Transformers movie series. It’s perfect for a teen graphic novel collection and also for juvenile collections that already such books like TenNapel’s Ghostopolis.

Highly recommend for all libraries.